Home/Blog, Cold Countries, Moscow, Tips, What to do/Moscow in 24 Hours

Moscow is instantly recognizable by many of its iconic buildings and locations that have borne witness to significant historical moments over the centuries. Today, it retains its rich character and heritage even as touches of modernism infringe upon its skyline. A 24-hour layover is just right to skim the surface and feel the pulse of this old but vibrant and constantly evolving city.

A short visit has to include a trip to the Red Square in the very heart of Moscow which was also the spiritual and political heart of the nation for centuries. Around it are several important landmarks you have probably heard of in the news countless times, and seen images of almost as often – the Kremlin, St. Basil’s Cathedral and Lenin’s Mausoleum.

If you want snapshots of your holiday your friends will talk about, this St. Basil’s Cathedral will form the perfect backdrop- it is one of those buildings that most people can recognize even if they cannot identify it by name.

Reminiscent of the gingerbread house of fairy tales, its colorful series of spirals and domes are a wonderful example of color in architecture that has stood since for almost five hundred years. Amazingly, there is no other building in Russia that sports the same design flair. Whereas the exterior gets the lion’s share of accolades, the intricate murals that line the walls inside are superior works of art in their own right.

The Kremlin, a name that means ‘fortress in a city’ is aptly chosen; the Kremlin Wall which encloses its triangular grounds is over three yards thick at its narrowest points and almost double that elsewhere. It is the official residence of the Russian President and has been the home of tsars and tsarinas in its rich history.

Within its perimeter are twenty towers, five palaces and four cathedrals. These host several Kremlin Museums – the Armoury Chamber and the Ivan the Great Bell Tower among them – and entry is free for anyone under the age of sixteen. These hosts several exhibitions focusing on different types of performance and visual arts throughout the year.

If you are in Moscow on a Monday, Wednesday, Thursday or Saturday, you can catch a literal glimpse of history at Lenin’s Tomb. Preserved since his death in 1924, his body has been on almost continuous display to today. A recent poll suggested that about 70% of Russians would like to see him buried, so the opportunity may not be around much longer.

On a decidedly lighter note, also in the Red Square area sits the GUM department store. Hard to miss for its 794 feet facade, the GUM building was originally constructed in the late 19th century. Today, it houses upscale stores under a clear curved roof and is an excellent place to indulge in carefree shopping and wonder at how Russia has changed since the Soviet days.

The biggest toy store in Europe, Children’s World is not far away. Delightfully designed with bright colors and many, many oversized cartoon characters, this is a great place not to just be dazzled by the wide array on display for sale, but for the toy museum it houses. The simplicity of children’s entertainment in the past will truly astound.

The Bolshoi Theater, built almost two centuries ago, would be an ideal place to indulge your cultured side in the evening. Both ballet and opera are performed on stages that have been viewed by Russian and European royalty; performances by the very leading male and female stars of every era since its inception. Tickets can cost as little as 100 rubles (approximately USD 1.60) and as much as 7000 rubles (about USD 104). 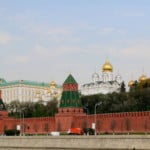